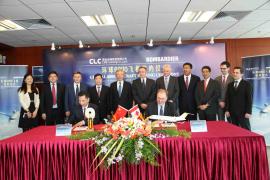 The firm order is valued at approximately US$293 million, based on typical 2012 list prices.

“We are delighted that, once again, Bombardier products are selected for key business expansion by business leaders in China,” says Steve Ridolfi, president of Bombardier Business Aircraft.

CDB Leasing is the sole leasing arm of CDB, as well as the largest lessor in China by asset value. Aviation leasing is CDB Leasing’s core and most mature business sector, with an international reach.

“We are very positive about the general aviation market, especially in China,” says Wang Chong, Chairman, CDB Leasing. “The relationship between CDB Leasing and Bombardier on Global 6000 jets is also the beginning of our new endeavour in the business aviation industry.” – Andrzej Jeziorski

EMBRAER Executive Jets completed the maiden flight of its second Legacy 500 mid-size business jet in mid-February, bringing the aircraft into the test and certification programme. “The test programme is proceeding as planned, and now that Serial Number Two has flown, the test campaign will accelerate,” says EEJ president Ernest Edwards. “The initial flight test feedback has been very favourable. The aircraft and systems overall performance is above expectation.” The Legacy 500 has flown more than 44 hours in 23 flights since its first flight on 27 November, 2012. Initial envelope clearances, including flying qualities, systems evaluation and engine/APU air starts, have been completed. In late January, the aircraft performed a series of natural stalls with results that met expectations.

GULFSTREAM Aerospace won type certification for its G280 aircraft from the European Aviation Safety Agency (EASA) on 7 February, in one of the final steps required for the jet to be registered in a European Union country. The G280, a joint effort between Gulfstream and Israel Aerospace Industries, earned its US and Israeli type certification on 30 August 2012, entering service on 13 November last year. The aircraft offers a range of 3,600nm (6,667 km) at Mach 0.80, with a balanced field length 210ft less than originally announced, which enables it to take off from runways of 4,750ft or less – an improvement of more than 1,300ft compared to the G200, the aircraft the G280 replaces. The G280 has a maximum operating speed of Mach 0.85.