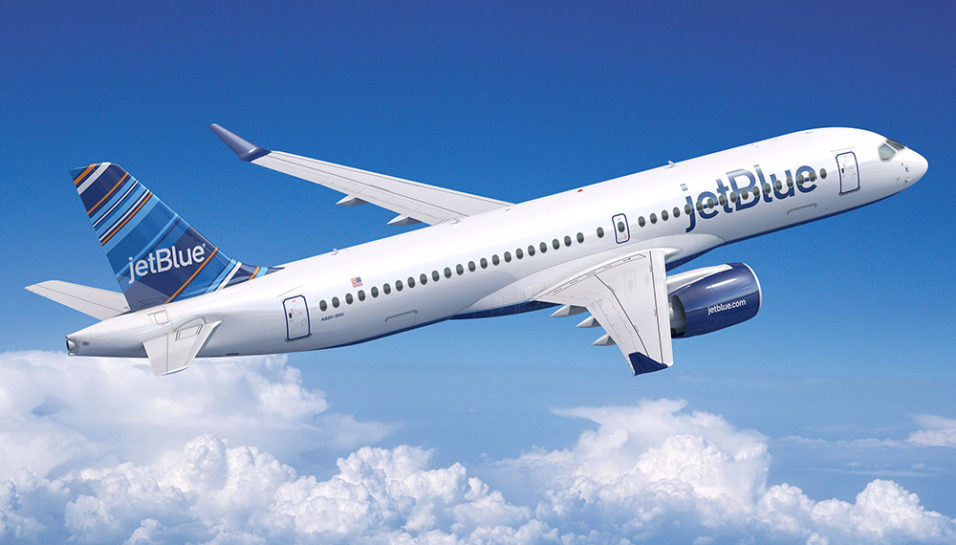 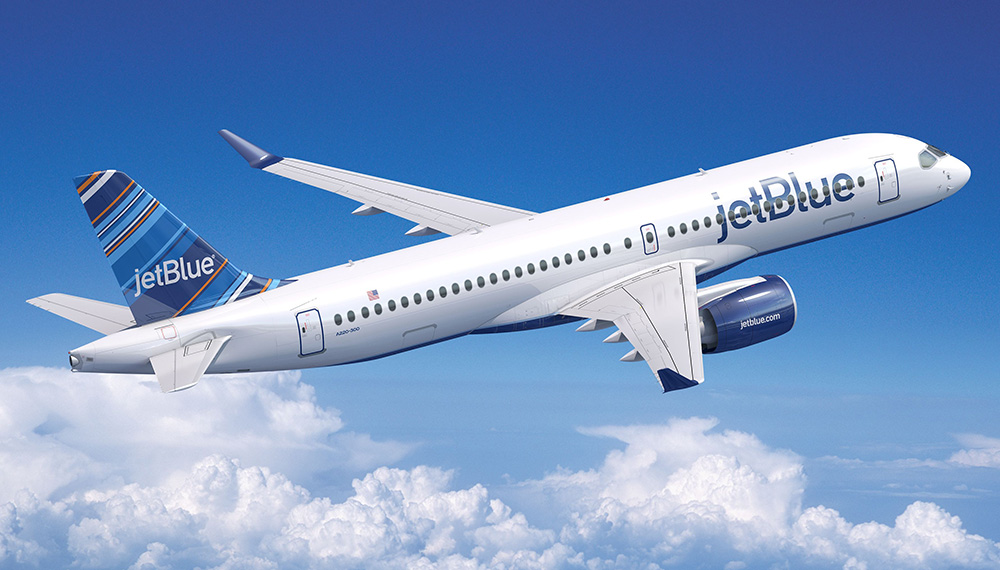 JetBlue announced it has ordered 60 Airbus A220-300 aircraft, previously called the Bombardier CS300, for delivery beginning in 2020, with the option for 60 additional aircraft beginning in 2025.

The aircraft will be powered by Pratt & Whitney Geared Turbofan (GTF) PW1500G engines. The order follows JetBlue’s intensive review aimed at ensuring the best financial performance of the airline’s fleet while providing maximum flexibility to execute its network strategy and enhancing its industry-leading customer experience.

As part of the agreement, JetBlue has also reshaped its Airbus orderbook, including converting its order for 25 A320neos to the A321neo and adjusting the delivery schedule.

“We are evolving our fleet for the future of JetBlue, and the A220-300’s impressive range and economics offer us flexibility and support our key financial and operating priorities,” said Robin Hayes, chief executive officer, JetBlue. “As we approach our 20th anniversary, the A220, combined with our A321 and restyled A320 fleet, will help ensure we deliver the best onboard experience to customers and meet our long-term financial targets as we continue disciplined growth into the future.”

“JetBlue’s selection of the A220 aircraft as a complement to its growing A320 Family fleet is a tremendous endorsement – both of the A220 itself and of the way these two aircraft can work together to provide airline network flexibility and a great customer experience,” said Eric Schulz, chief commercial officer for Airbus. “JetBlue will be able to leverage the unbeatable efficiency of both the A321neo and the A220-300, as well as taking advantage of the roomiest and most customer-pleasing cabins of any aircraft in their size categories.”

“We’re honored by JetBlue’s confidence in selecting the A220-300 aircraft which adds to their existing order of the A320neo family of aircraft both powered by the Pratt & Whitney GTF engine,” said Chris Calio, president of commercial engines at Pratt & Whitney. “We’ve been powering JetBlue with our V2500® engines since they started operations in 2000. We now look forward to also supporting JetBlue across their two new fuel-efficient, next-generation aircraft platforms.”

The A220-300’s spacious and comfortable cabin makes it the perfect fit for JetBlue, which has consistently led U.S. airlines in the onboard experience. The A220’s cabin design offers customers the best inflight experience with wider seats, spacious overhead bins and extra-large windows that offer a great view from the sky and on the ground.

JetBlue conducted a comprehensive review of multiple options for its 100-seat aircraft. In addition to its financial analysis, JetBlue invited frontline leaders and crewmembers, including technical operations, to evaluate the aircraft in person at JetBlue’s JFK hangar.

JetBlue plans to phase in the A220-300 as a replacement for JetBlue’s existing fleet of 60 Embraer E190 aircraft. The aircraft’s range and seating capacity will add flexibility to JetBlue’s network strategy as it targets growth in its focus cities, including options to schedule it for transcontinental flying. The aircraft also opens the door to new markets and routes that would have been unprofitable with JetBlue’s existing fleet.

“We expect the A220 to be an important long-term building block in our goal to deliver superior margins and create long-term shareholder value,” said Steve Priest, executive vice president and chief financial officer, JetBlue. “We are confident the A220 will perform well in every aspect, including network, cost, maintenance, or customer experience. Simply put – our crewmembers, customers and owners are going to love this aircraft.”

While the E190 has played an important role in JetBlue’s network since 2005, the airline’s fleet review determined that the A220’s economics would allow the airline to lower costs in the coming years. The A220 was designed by previous manufacturer Bombardier to seat between 130 and 160 customers, enabling financial and network advantages over the current 100-seat Embraer configuration.

“The diligence that went into this analysis from teams across JetBlue speaks to the aircraft’s importance for the next generation of our airline,” Priest said. “We expect a seamless transition, and we’ve worked with Airbus and Bombardier to build in maximum flexibility to the order book as market conditions shift over time.”

JetBlue plans to take delivery of the first five aircraft in 2020, the airline’s 20th year of service. Deliveries will continue through 2025. JetBlue expects it will begin to reduce flying with its existing fleet of E190 aircraft beginning in 2020. The phase out will continue gradually through approximately 2025.

Options for 60 additional aircraft begin in 2025, and JetBlue retains flexibility to convert certain aircraft to the smaller A220-100 if it chooses. Both members of the A220 Family share commonality in more than 99 percent of their replaceable parts as well as the same family of engines.

JetBlue’s A220 aircraft will be assembled in Mobile, Ala.